The 2020 State of Driving Safety in Texas 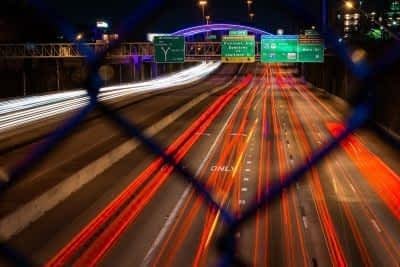 There are more than 24 million registered vehicles in Texas, according to 2017 data from the Texas Department of Motor Vehicles. Further, in 2018, there was a total of 12,161 serious injury crashes within the state, and a motor vehicle traffic fatality death toll of 3,639, meaning one person was killed every 2 hours 25 minutes. Looking at these numbers—and beyond—what is the current state of driving safety in the state of Texas?

Below is Aceable’s analysis addressing each of the above topics.

Which Texas Cities Are the Most Dangerous for Drivers?

Of the 40 most populated cities in Texas, Aceable calculated which cities have the highest rate of fatal car accidents per 100,000 residents, using 2018 data from Texas Department of Transportation (TXDOT) and U.S. Census estimates. Below are the findings. 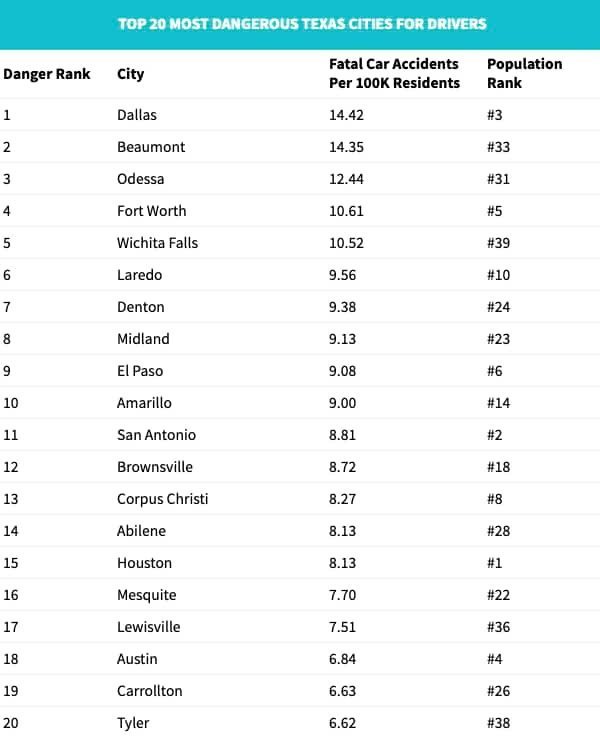 Which Texas Cities Are the Safest for Drivers?

Of the 40 most populated cities in Texas, Aceable calculated which cities have the lowest rate of fatal car accidents per 100,000 residents, using 2018 data from the TxDOT and U.S. Census estimates. Below are the findings. 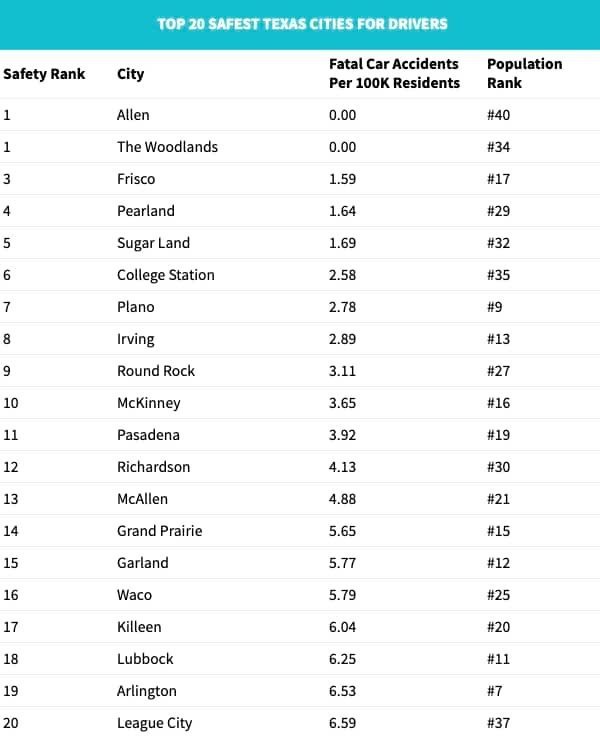 Insights on most dangerous cities and safest cities rankings:

Which Texas Cities Are the Most Dangerous for Drunk Driving?

Again using data from TxDOT and the U.S. Census, Aceable calculated which of the top 40 most populated cities in Texas have the highest rate of DUI-related fatal car accidents per 100,000 residents. Below are the findings: 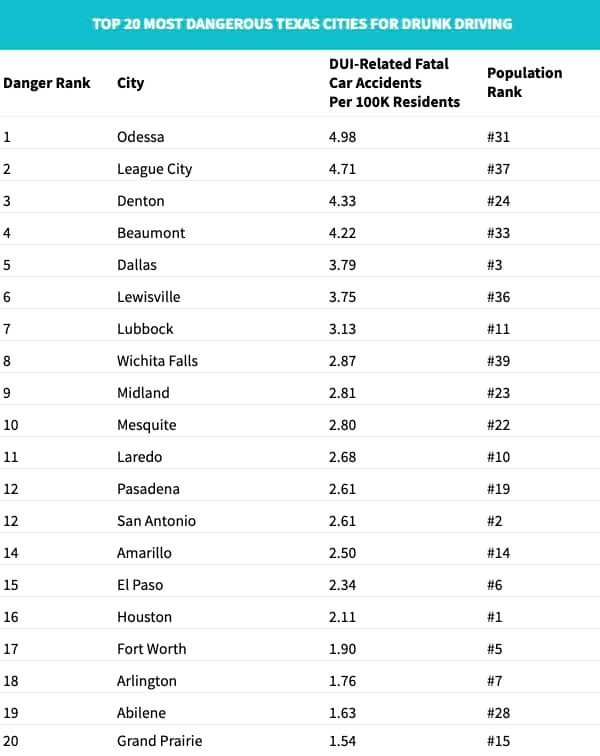 How Strict Are Texas’ Driving Laws Are Compared to Rest of Country?

Aceable compared Texas driving laws based on seven different categories to determine how the Lone Star State stacks up nationally. The categories, inspired by the Strict Driving Law study by YourMechanic.com, include:

Drunk Driving — In all 50 states, the legal limit for alcohol consumption is a blood alcohol concentration (BAC) level of .08. Besides this universal rule, there are many differences with DUI laws relating to extreme DUIs, license suspensions, and post-DUI driving privileges.

Overall, the DUI laws and penalties for Texas are average when it comes to being strict vs. lenient.

Child Passenger Safety — Texas drivers are subject to fines as high as $250 (plus court costs) if given a ticket for an unrestrained child (ages 0-8) in their vehicle. This fine amount is more strict than other states such as South Dakota and New Mexico, which levy a $25 fine for the first offense.

Seat Belt — Texas drivers who are ticketed for not wearing their seatbelt could face fines and court costs up to $200. Texas is one of the stricter states when it comes to seatbelt laws. States like Missouri and Arizona only require a fine of $10 for the same offense.

Speed Limits —Texas ranks as the 49th least strict state when it comes to speed limits, with a limit of 75 mph on both urban and rural roads, according to Your Mechanic. On the opposite end of the spectrum, Vermont, Oregon, and Rhode Island have speed limits of 55 and 65 mph for urban and rural highways, respectively.

Novice Driver — Texas teens can get their driver's permit when they turn 16 years old. They must use this restricted-use permit for 6 months and have 30 hours of driving under their belt before getting their full privilege license.

Speed Camera — HB 1631 was passed by Texas lawmakers in June 2019. This eliminated red light cameras from all roadways, so the issue is no longer a concern for Texans. Only a handful of other states have enacted similar laws, so Texas is one of the most lenient states when it comes to speed and red light cameras.

Here's a summary of how Texas driving laws compare to other states based on the categories we discussed.

Legislation, Infrastructure and Other Factors

In addition to HB 1631, which banned red-light cameras, another change that recently took place was the repealing of the Driver Responsibility Program. Previously, the program implemented escalating fines and penalties for petty traffic violations. This created financial hardships for residents, as nearly 1 million Texans lost their driving license due to the confusing fine structure. All drivers were able to reinstate their licenses when the bill passed in September.

Of course, there are other factors to consider when it comes to driving safety, such as congestion, infrastructure, and cost of ownership. In a 2019 WalletHub study that looked at these three areas, Texas ranked as the fifth-best state. Overall, Texas claimed the 43rd position in infrastructure and traffic and the 19th position in cost of ownership, meaning these are items that lack behind other states.

Driving safety in Texas varies significantly by location, as the above data suggests. The Houston Chronicle analyzed federal highway data from the past 16 years and determined Houston was the deadliest metro area in the country.

For this report, Aceable reached out to TxDOT to gain insight into their current efforts to make the roads safer for drivers. They responded:

"TxDOT recently set a goal to have zero fatalities on the road by 2050 and to cut them in half by 2035. November 1, 2000, was the last deathless day on Texas roads. We believe through engineering, education, and enforcement efforts combined with a public awareness campaign, we truly can stop all deaths on the road. Our commission has already approved $600 million in extra funding in the state’s 10-year plan. This has become a common idea in the state, with multiple metro-area cities also approving similar goals."

"Our #EndTheStreakTX campaign provides simple tips for drivers so they can take an active role in preventing crashes on the road. To learn more about this campaign, visit our web site: www.endthestreaktx.com."

Driving safety varies across the state of Texas, especially when DUIs are thrown into the mix. Some of Texas's driving laws promote safety with a strict child passenger and seat belt regulations, but laxity with speed camera, novice driver, and speed limit laws potentially cancel out these effects. While TxDOT is leading efforts to make the roads safer, Texas still has a long way to go before reaching its goal of zero on-road fatalities by 2050.

Since 2014, Aceable has offered over 276 hours of online and mobile-based drivers education in nine U.S. states. The Texas-based company provides entertaining and engaging expert content that helps students learn at their own pace.

This study was published by Aceable.com on February 18, 2020.