Why You Should Wear A Seat Belt

Seat belt safety is super important. Wearing your seatbelt significantly reduces your chances of being ejected from the vehicle in the event of a crash.

More Driving Topics Select a Topic Types of Driver Licenses New Vs Used Cars Vehicle Financing Auto Insurance How to Organ Donation Checklist for Approaching Your Vehicle Why You Should Wear Your Return to Main Page Wearing your seat belt is legally required and for good reason. Did you know that you’re 30 times more likely to be ejected from a motor vehicle during a crash if you’re not wearing a seat belt? Yeah, ejected. That’s a word that should only apply to missiles and DVDs, not people. Crashing through a windshield and onto the street, or worse into highway traffic) makes surviving a crash unlikely, so it’s in everyone’s best interest to buckle up before every drive and practice some seat belt safety, whether you're the driver or a passenger. Seat belt laws aren't in place just for fun. According to AAA Exchange, nearly 33,000 people are killed in crashes and accidents each year. This is scary, we know! But wearing your seat belt can help reduce this number. See what good old Isaac Newton has to say about the physics involved.

According to this law of physics, also known as the Law of Inertia, “An object at rest will remain at rest, and an object in motion will remain in motion (at a constant velocity) unless acted upon by an external force.” Sounds simple enough. Things don’t just start or stop moving on their own. They’re gonna keep doing their thing until something (a force) changes that. In the case of a vehicle, its movement is usually stopped by the friction of brakes.

Why are we bringing up the First Law of Motion in order to convince you to wear a seat belt? Because the Law of Inertia applies to you whenever you’re in a vehicle (also all the time, but that’s beside the point…). Your body is traveling at the same speed as the vehicle even though you’re just sitting on your butt. If the vehicle stops abruptly, whether it’s a hard stop or an automobile accident, your body will continue moving forward. Something’s gotta stop that motion and airbags usually aren't enough. Do you want it to be a seat belt or the windshield? Seat belts prevent excessive injury when your vehicle and your body need to slow down in a hurry. This applies whether you're in the driver seat, passenger seat or if you're a back seat passenger.

When you're driving with a child passenger, there may be a few other factors you have to take into consideration to make sure they're securely belted into their seats. As a starter point, kids under 13 should always ride in the back seat. Even with proper child restraints, kids are just too small to ride safely in the front seat. This is mostly because airbags aren't meant for child passenger safety.

Putting on your seat belt may seem like a simple and sometimes pointless task, but we assure you that you'll feel differently if you're ever in a car accident. Choosing not to buckle up can result in some really serious injuries or even a fatal injury. Not to mention, there are seat belt laws in place that could result in you having a chat with a law enforcement officer. 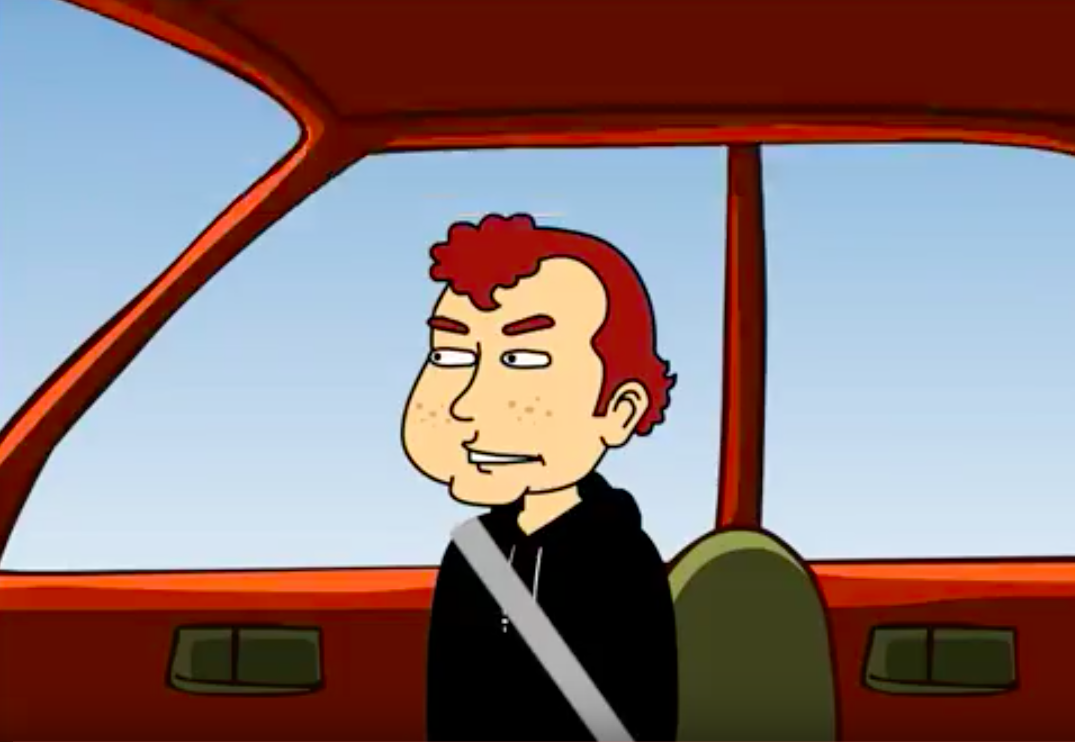 Be cool like this guy, wear a seat belt.

The good news is that the number of drivers and occupants getting buckled up before hitting the road is rising! According to the National Highway Safety Administration, seat belt use reached a historic 90.1% in 2016. This could be the result of more traffic safety features in cars, more effective drivers ed courses (cough, cough, Aceable) or perhaps a better awareness of defensive driving techniques and how to increase passenger safety nationwide. Whether you're a teen or adult driver, have a seat belt policy in your car that you don't start driving until all of your passengers are have fastened up. Be smart. Wear a seat belt.