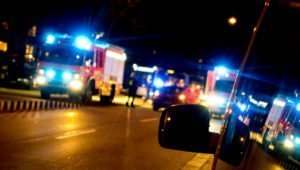 According to the CDC, approximately 9 people are killed and more than 1,000 are injured in distracted driving-related crashes every day in the U.S.

Distracted driving is defined as “doing another activity while operating a motor vehicle.” Everyone knows that you should pay attention while driving, but not many practices absolute focus behind the wheel.

Here are five unbelievable distracted driving crashes that resulted in tragedy and what you can learn from them.

A 17-year-old was checking Facebook and driving in Minnesota and ended up running a red light. While careening through the intersection, her pickup truck smashed into another vehicle, killing a father and his young daughter. The driver was also injured. Gruesome images show her impaled by a pole.

Texting and driving is never a good idea. Wait a few minutes until you have safely reached your destination and then respond. No amount of FOMO (fear of missing out) is worth your life or that of an innocent fellow driver’s.

2. Teen survives first distracted-driving crash, but not the second

Amanda Clark was on the phone when her Chevrolet Trailblazer rolled three times, landing on its roof. According to the Sacramento Bee, the Oakdale teen wrote about her near-death experience. “I hate the thought of dying without my family knowing how I felt about them,” she wrote.

One year later, she was driving while on the phone again, and lost control of her car, crashing violently. Cellphone records proved that she was texting. She was found unresponsive at the scene and died the next day.

The simple solution here is to not text and drive. Even speaking on the phone can be a form of distracted driving. If you must answer a call, use the hands-free function but do everything you can to refrain from phone use while driving.

3. She left for a study session and never came back

Maria Elizabeth Tiberi wasn’t driving while distracted, but because someone else was, she lost her life. According to the National Highway Traffic Safety Administration, She was one of 3,154 people killed in 2013 by distracted drivers. Since Maria’s death, her father, an Ohio sports anchor, has visited high schools sharing her tragedy and the dangers of distracted driving.

You cannot control the behavior of others on the road, that is why it is extremely imperative that you be completely distraction free. That way, you can see others’ odd behavior (whether it be swerving, not moving when lights change, or even music up too loud). By monitoring yourself and those around you, you can ensure a safe driving experience.

The driver of a pickup truck was texting when he collided with a church minibus in rural Texas. As a result, 13 people died. The driver took responsibility for his distracted driving and expressed remorse, but that did not change the fact that his actions led to the deaths of 13 people.

Brooke Scherer and her husband Jordan were driving with their two children on an afternoon trip when they hit some traffic. Then, suddenly everything changed. She came to after the crash, her husband was slumped over the center console, her 5-year-old daughter was screaming, and her 9-year-old son had been killed instantly.

The Scherers and their attorney say there’s evidence that the driver of the Hyundai coupe had been looking down at his phone just before he slammed into the family’s SUV, killing their son and changing their lives forever.

If this list teaches you anything, it should be to never, ever text and drive. Even if you’re slowed down in a traffic jam, or if you’re sitting at a red light, do not do it. Nothing is worth killing yourself or others over. It can wait. People will understand. If you get in trouble for not responding to a work email, or text from a family member tell them: I’m driving. That’s it.

Andrea is a 15-year news veteran with experience in community journalism, automotive reporting, and traffic safety marketing. She's a Detroit native, past Super Bowl attendee, lover of all things editing and content.