The road can be a dangerous place.

In an attempt to make it safer, states enact laws to prevent unsafe driving behaviors. These laws are meant to deter people from driving dangerously and to protect drivers, passengers, pedestrians, and cyclists.

Speed limits, traffic signs, and distracted driving laws are just some of the ways states use laws to improve driver behaviors.

But do these laws really prevent us from driving dangerously?

In observance of National Distracted Driving Awareness Month, we want to take a closer look at the laws meant to prevent distracted driving. We also want to see how effective those laws are at making us safer drivers. 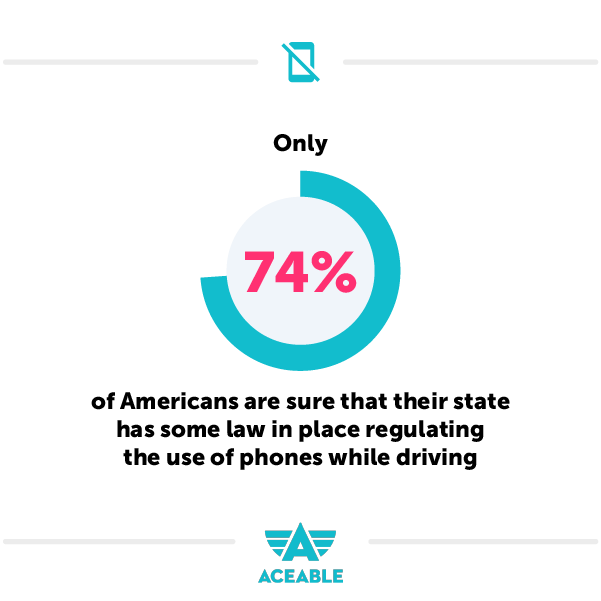 Nearly all states have laws about cell phone use while driving. The Insurance Institute for Highway Safety publishes information on cell phone laws by state. Here are some notable facts:

These laws are always changing.

Georgia, for example, signed a hands-free act in 2018. And while California banned hand-held usage back in 2008, the law was adjusted in 2021 so that a second violation within a 36-month period would result in an additional point against the driver's license.

Interestingly, despite all states except Montana having laws about using devices while driving, only 74% of Americans say that their state has some law in place regulating the use of phones while driving.

The Effectiveness of These Laws

If 74 percent of Americans are aware of their state’s driving laws, does that mean 74% are abiding by those laws? Not quite. In a recent survey, only 48% of respondents said that the laws are a good deterrent.

It seems as though many drivers feel their chances of getting caught are low. So they feel comfortable using their phones while driving.

The good news is that the laws are an effective deterrent for many other drivers. In the year following Georgia’s hands-free law, fatalities decreased by 2.2 percent. It may be a small percentage, but it’s still 33 lives saved! 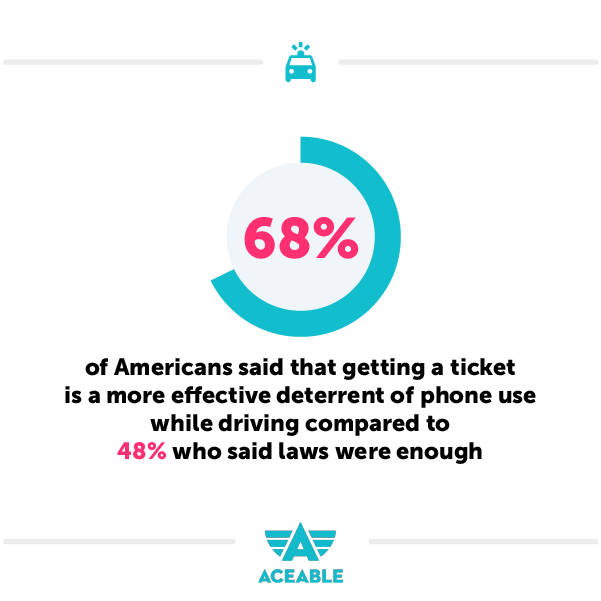 Getting a Ticket is the Real Deterrent

If enacting laws doesn’t deter distracted driving behaviors, what will?

68% of people surveyed said that getting a ticket is a more effective deterrent than having a law on the books.

Unlike a law, which only affects you if you get caught, getting a ticket means you’re paying a direct consequence for your unsafe driving behavior. Once you’re hit with a fine or points against your license (or both), you feel the real impact of your behavior.

Paying the consequences of distracted driving makes people more likely to change their behavior. In fact, over 3/4 of those surveyed agree that receiving a ticket made them more focused behind the wheel.

Getting a Ticket May Prevent the Unsafe Driving Behavior from Recurring

The bad news is that traffic laws don’t have as much of an impact on preventing unsafe driving behaviors as we would hope. But there’s some good news: when drivers receive a ticket, they are less likely to be repeat offenders. 38% of survey respondents report that they have not received a traffic ticket since their first ticket. And 69% report that it took years before their second infraction.

How to Drive Safely and Avoid a Ticket

Instead of waiting until after you get a ticket to practice safe driving, take proactive measures today to become a safer driver. Avoiding a ticket will save you money and will keep your driving record clean. As if that weren’t enough of an incentive to follow driving laws, safe driving prevents car crashes!

Keep yourself, your loved ones, and your fellow drivers safe by practicing these ticket-avoiding tips:

Laws are enacted with the intent of preventing unsafe driving behaviors like distracted driving.

For many people, laws are a strong enough deterrent to drive safely and avoid a ticket. But for many other people, the law isn’t enough. Some people just won’t change their behaviors until they personally feel the consequences. For these people, getting a ticket has a bigger impact in changing their driving behaviors than the law does.

Thankfully, once people do feel the consequences of their distracted driving by receiving a ticket, they become more focused drivers. And the effects last for years. This effectively prevents drivers from getting repeat tickets for distracted driving.

There are many things you can do to be a safer, more focused driver. One of the best ways to improve your driving habits immediately is to take a defensive driver course. Enroll in an online course today and be a safer driver tomorrow!