What You Need to Know About Driving Anxiety Post-Pandemic

After more than two years of covid lockdowns, social distancing, and working from home, people are getting back to their pre-pandemic lives. But a lot of folks are feeling anxious about driving these days. Aceable commissioned a study to find out what’s behind this new anxiety.

Some People Are Still Driving Less 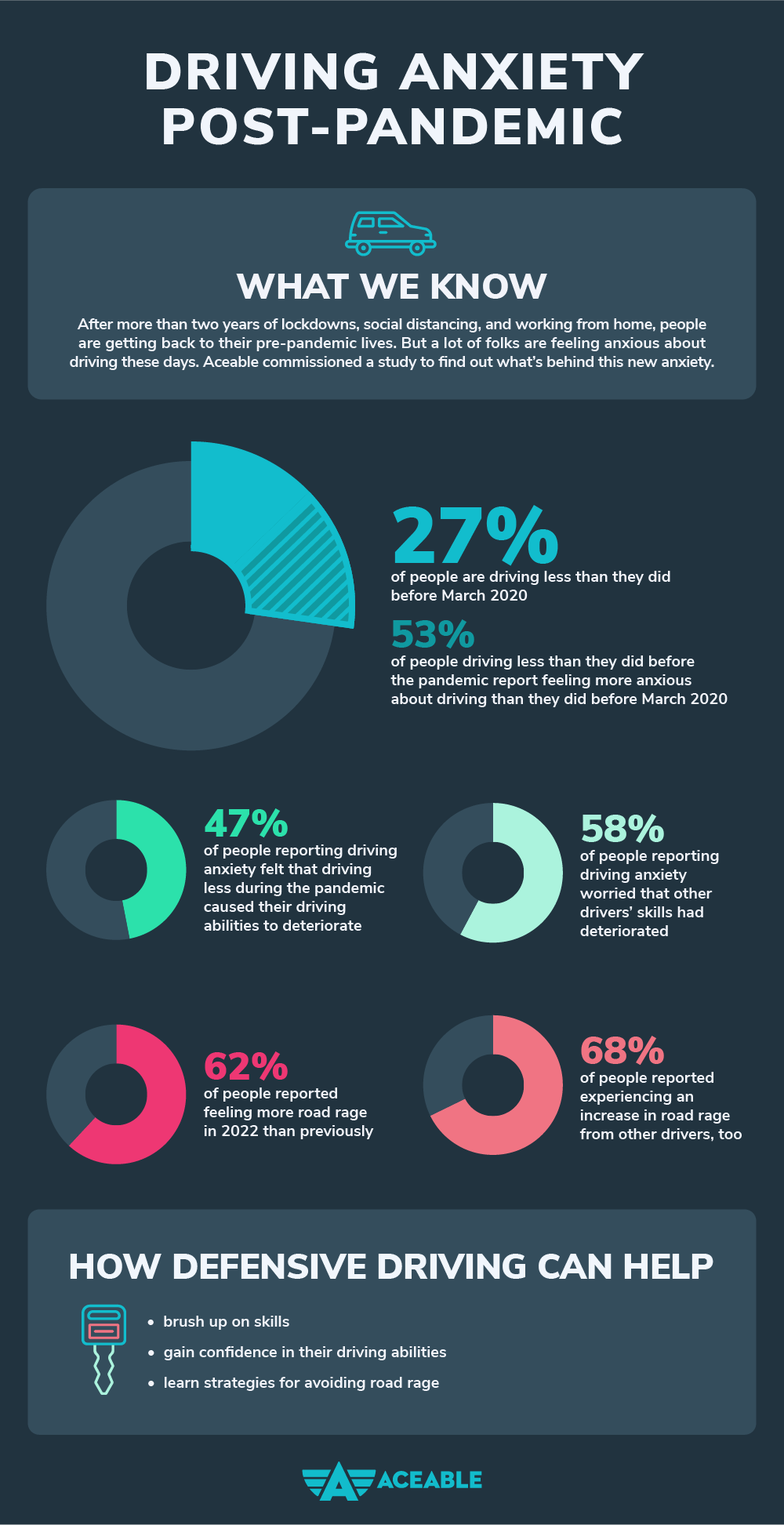 So what’s causing this newfound driving anxiety? For some people, the worry is about other drivers. A third of the people currently driving the same amount as they did pre-pandemic said they lacked confidence in the skills of the drivers around them.

Others are feeling rusty. Of the people who reported driving anxiety, 47% of respondents felt that driving less during the pandemic caused their driving abilities to deteriorate, and 58% worried that other drivers’ skills had deteriorated.

Not Just Anxious, But Angry

Frighteningly, 68% of people reported experiencing an increase in road rage from other drivers, too. It’s not helping that 76% of people found that traffic had increased noticeably since the start of 2022.

This data paints a picture of a driving populace experiencing huge increases in anger and fear. What can be done to combat these negative trends? A lot of people have turned to defensive driving courses.

Defensive driving can be a great way for anxious or angry drivers to brush up on skills, gain confidence in their driving abilities, and learn strategies for avoiding road rage.

How to Find a Defensive Driving Course

Defensive driving courses can be purchased online and completed from any device at your own pace.

There are also in-person defensive driving options, often offered at the same driving schools that offer driver’s ed courses. Defensive driving can not only help drivers feel less anxious but can, in some instances, get them discounts on their auto insurance.

Aceable’s 2022 driving anxiety survey makes it clear that drivers are feeling more anxious and more prone to road rage than they were before the pandemic began. There are many potential causes for this change: skill loss from driving less, increased traffic, and trauma from the pandemic itself.

Taking a defensive driving course is one tool drivers have to combat their driving anxiety. Depending on the severity of the anxiety, some drivers might also need support like therapy, medication, centering practices like yoga and meditation, or other interventions. The important thing is that drivers experiencing anxiety take action to alleviate it, for their own mental health and safety.

This study surveyed 612 U.S.-based drivers aged 18+. All respondents held an active driver’s license and owned or leased a car for personal use. Respondents came from 47 of the 50 U.S. states, and were 59% male and 41% female, with an average age of 37.