Are We Ready for Driverless Cars?

Ready or not, driverless cars are coming. Even today in 2021, we have vehicles with self-driving features on our roadways. They aren’t 100% autonomous; they still require the attention and assistance of a human driver. But they represent a dramatic move forward toward driverless cars.

Take Tesla, for example. With Tesla’s autopilot feature, the car effectively drives itself, steering, braking, and accelerating as needed. But, as Tesla points out, “Current Autopilot features require active driver supervision and do not make the vehicle autonomous.”

So when will vehicles become autonomous?

In a recent survey of American drivers, 56% of respondents said that autonomous self-driving cars will take over the roads within the next ten years.

This split in respondents matches the uncertainty of the auto industry. Elon Musk had predicted in 2016 that autonomous vehicles would be in circulation by 2020. That didn’t happen. Some manufacturers are saying autonomous cars will be commonplace by 2030, while other experts are predicting the date to be closer to 2050.

But the consensus is that it’s just a matter of time.

Autonomous, driverless cars are coming. Are you ready?

Would You Get in a Driverless Car? 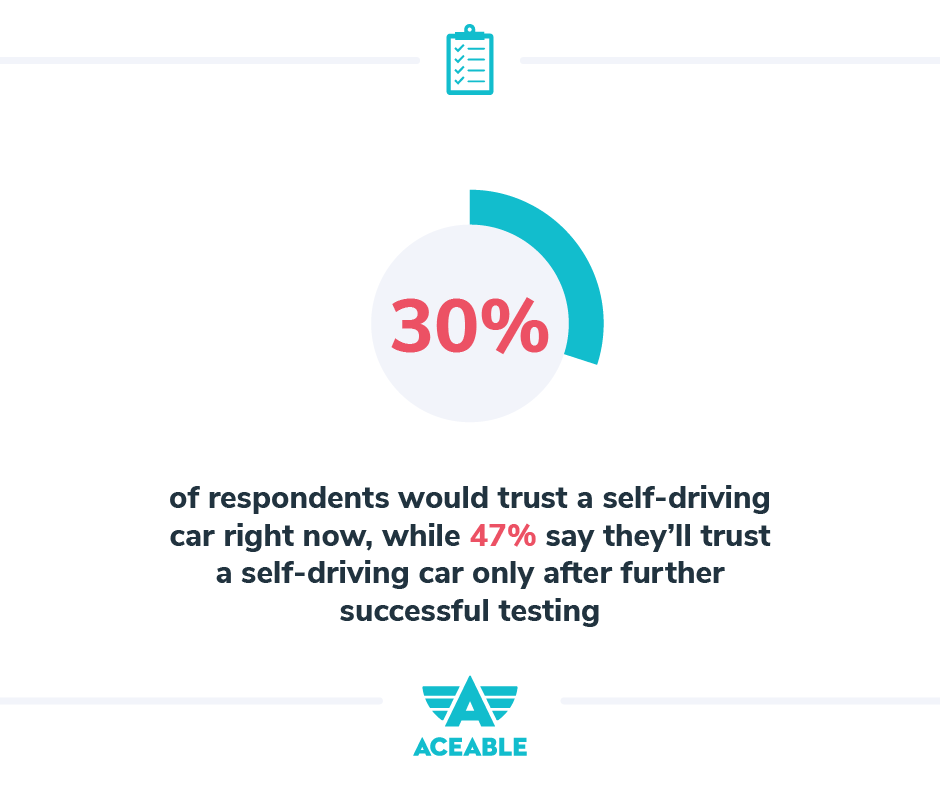 In our recent survey, 30% of respondents said they would trust a self-driving car right now. This group of risk-takers is mostly made up of male drivers under 20. The under-20 demographic was 59% more likely than those 20 or over to trust today’s driverless cars. And female respondents were 26% less likely than men to be comfortable with the idea of getting in a driverless car today.

A larger percentage (47%) said they would be open to trusting self-driving cars but only after further successful testing.

6 in 10 respondents admit they are afraid to get into a driverless car. As with most new technology, the older demographic is more afraid of the change. Those over 40 were 26% more likely than the younger set to express fear about driverless cars.

Trusting our own vehicles may be one thing, but trusting someone else’s vehicle is different. With your own vehicle, you can be confident that the car is being properly maintained and submitting to regular maintenance checks. But with a vehicle owned by someone else, like a rideshare vehicle, for example, you would need to trust that the owner is properly caring for the vehicle, in addition to trusting the technology itself.

A majority (56%) of respondents said they would never get into a self-driving ride-sharing vehicle. This mistrust is more prevalent among women, with female respondents being 21% more likely to say this.

This all indicates that many people are uncomfortable with the idea of getting into a driverless vehicle. But what about allowing others to take advantage of the tech? Well, we’re not yet comfortable with that either. Because driverless cars don’t only affect the passengers in them, they can also affect the drivers around them. 56% of respondents reported that they do not want to share the road with driverless cars.

Who Is Ready for Driverless Cars?

There is one group that is clearly more ready than most for driverless cars: people who already own a car with self-driving features. 8 in 10 of respondents with a self-driving feature say it makes them more likely to trust completely autonomous vehicles.

But even within this specific group, age and experience play a factor in our comfort level. Those in this group who have been driving for 11 years or more were 19% less likely to say they would trust completely autonomous vehicles.

Our Top Fears About Driverless Cars

What exactly are people afraid of?

According to our recent survey, here are our top fears about driverless cars: 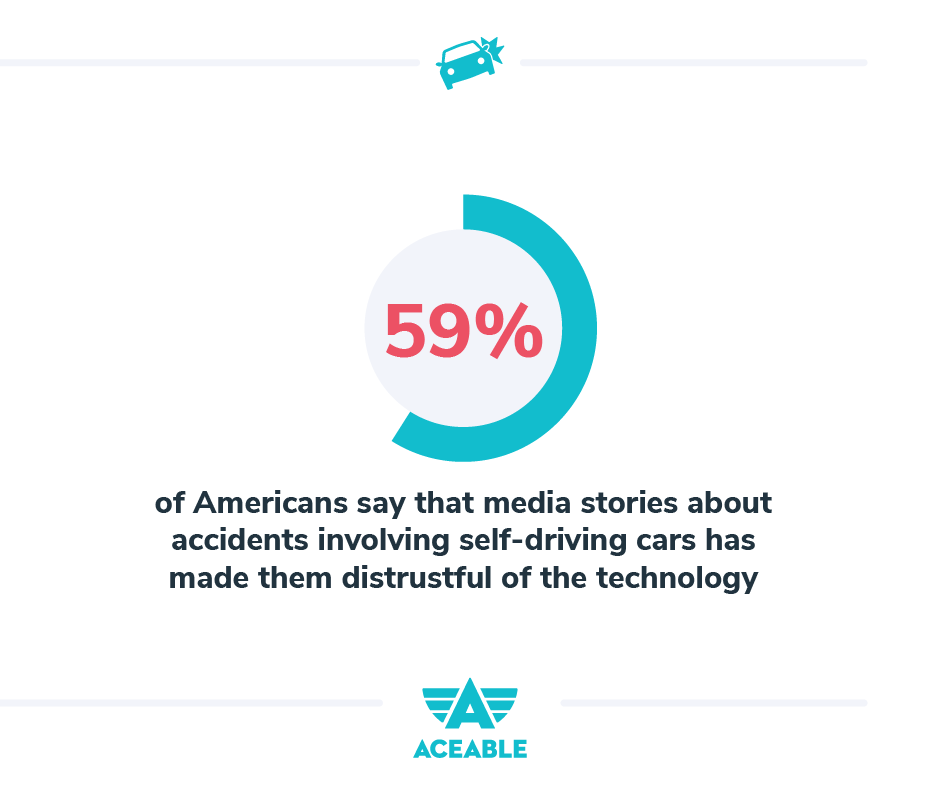 These fears are not altogether unfounded. There have been accidents involving self-driving cars. Although, to be fair, at this level of automation, drivers are still supposed to be actively involved in supervising the vehicle, and in several cases, drivers were lulled into a false sense of security and failed to practice diligent driving. And the possibility of a data breach is a legitimate risk that the industry will need to continuously combat.

But before you write off driverless cars as being too dangerous, consider the dangers of human drivers.

Consider the Risks of Human Drivers

Human error results in millions of car crashes every year. In 2018 alone, there were around 12 million vehicles involved in car accidents just in the United States.

Sadly, humans are susceptible to poor judgment, distractions, and simple mistakes that result in crashes.

As driverless cars use machine learning to become more reliable, they will offer a safe alternative to drinking and driving and will eliminate the need for us to keep our attention on the road.

In fact, the National Highway Traffic Safety Administration (NHTSA) is a major proponent of driverless cars because they can remove the human error component from driving!

But until reliable autonomous driverless cars become mainstream, we’re responsible for keeping ourselves, our passengers, and everyone else on the road safe. A defensive driver course can help you learn safe driving techniques that take the human error of other drivers into account. Even if you can’t trust other drivers to behave appropriately behind the wheel, you can drive defensively to make the roads as safe as possible for you and your passengers.