Drunk driving and distracted driving both claim thousands of American lives each year. We looked at the data to find out which is more prevalent and which is more deadly.

We also explored state laws regulating drunk driving and distracted driving, and we looked to see which states have the highest number of violations of those laws.

Then we compared this past year to prior years. With more drivers staying home because of the pandemic, did we drive more safely in 2020 than we had in the past?

And how can you prevent drunk driving and distracted driving?

Here’s everything you need to know about drunk driving vs. distracted driving.

Drunk Driving vs. Distracted Driving: Which is More Prevalent?

It’s technically not possible to determine how often people drive drunk compared to how often they drive with distractions because we can’t catch every occurrence of drunk driving and distracted driving.

What we do know is that distracted driving has increased as distractions, in general, have increased, largely due to technology. A recent survey found that 61% of Americans admit to being more distracted in their daily lives as a result of smartphone usage. And 51% say they are more distracted while driving today than they were five years ago.

It’s safe to say that there are more distracted drivers than drunk drivers. After all, there is a certain percentage of American adults who don’t drink at all (estimated at around 30%), but none of us are immune to distractions. And with one out of every ten people having been in a car accident due to someone being distracted by their phone, distracted driving is clearly more prevalent than drunk driving.

According to the National Highway and Traffic Safety Administration (NHTSA), drunk driving resulted in 10,142 deaths in 2019 in the United States. This is far more than the 3,142 deaths caused by distracted driving over the same period.

Distracted driving fatalities have remained right around the 3,000-per-year rate for the past decade, despite laws being passed to combat distracted driving. This is likely due, at least in part, to our growing reliance on our cell phones. 79% of survey respondents report being more reliant on their smartphones when it comes to completing daily tasks and activities, like texting, emailing, and checking the weather.

There is a bit of good news: drunk driving fatalities are declining. The 2019 figures represent the lowest death toll from drunk driving since NHTSA started keeping statistics back in 1982.

How Are State Laws Addressing Drunk Driving and Distracted Driving?

All 50 states have laws against drunk driving. Most states require the blood alcohol content (BAC) levels of drivers to be less than .08. In Utah, the limit is .05.

The most common type of distracted driving laws pertains to phone usage. It would be impossible to write a law banning you from being distracted since humans can be distracted by any number of things. But lawmakers can write laws banning the use of hand-held phones while driving. 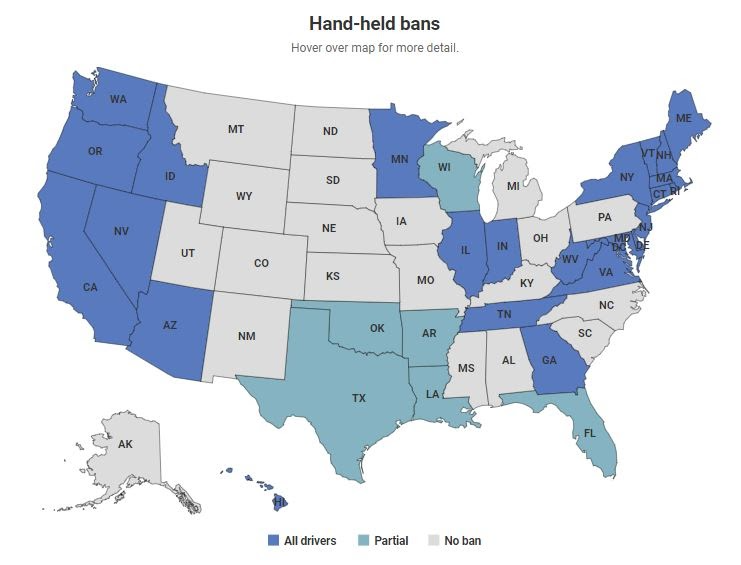 Which States Are the Worst for Drunk Driving and Distracted Driving?

States with lower population densities tend to see more drunk driving violations. This appears to be because 1) less traffic gives drivers a false sense of security, and 2) low-density areas have fewer public transportation and ride-share options.

The states with the most DUI violations are:

Distracted driving also tends to be worse in lower-density states. Again, this may be because the lack of traffic congestion makes drivers think they can take their eyes off the road more.

The states with the most distracted drivers are: 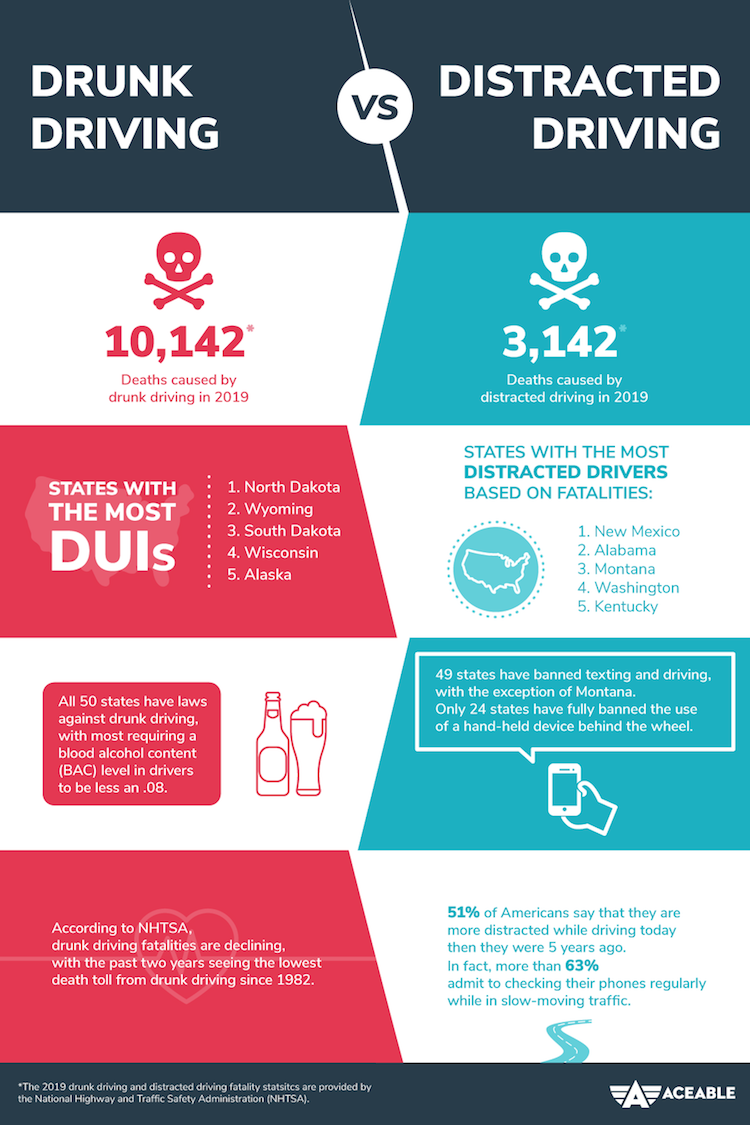 Organizations are still tabulating the crash stats and traffic data from 2020, but initial reviews indicate that drivers performed worse in 2020 despite driving fewer miles.

Crash stats for the first half of 2020 showed fatalities were down about 2% compared to 2019, which sounds like good news, until you remember that people drove less in 2020 because the pandemic kept us home. The fatality rate per 100 million vehicle miles traveled (VMT) actually increased from 1.06 in 2019 to 1.25 in 2020.

Why did the fatality percentage increase in 2020? There are a few reasons:

The lesson is clear: to remain safe on the road, you must remain vigilant. That means no drunk driving and no distracted driving.

Don’t become a statistic. Drunk driving and distracted driving can both be minimized, if not altogether avoided!

There are several ways you can avoid drinking and driving:

There are also several ways to avoid distracted driving:

Unfortunately, our driving habits appear to have gotten worse in 2020. The numbers are still coming in, but it looks like the crash and fatality rates increased during the pandemic. This could partly be because drivers drove more recklessly with less traffic on the roads.

There are plenty of ways to avoid drunk driving and distracted driving. Never get behind the wheel after drinking. And go out of your way to make your phone inaccessible while driving.

While you can’t force every other driver to follow driving laws and minimize the risks of drunk driving and distracted driving, you can train to anticipate bad drivers and avoid them. Enroll in an online defensive driving course today to help keep yourself and your family safe on the roads.