Is Your Smart Car Making You a Worse Driver?

Smart technology might be making our lives easier, but it also appears to be weakening some of our skill sets.

Take GPS for example. Before step-by-step directions to literally anywhere were available on our phones, we all had to learn our way around town, paying attention to local landmarks and remembering where everything was located in relation to everything else. But today, we can get around just fine, even while we’re oblivious to our surroundings.

Smart tech safety features in today’s vehicles may be doing the same thing. As driving technology increases, we rely more on it and less on our own driving skills.

A recent survey found that 6 in 10 respondents have been involved in an automobile accident while driving. This means more than half have hit someone or something at least once. Whether an accident was your fault as the driver or the fault of someone else, this is a scary-high number.

In the same survey,  35% of respondents reported being involved in an automobile accident while driving in the past year. That’s right, over a third hit someone or something during a year where there was light-than-normal traffic on the roads due to the COVID pandemic.

Is it really that hard to avoid a crash? And if today’s cars are enhanced with smart safety features, why are we still getting into so many accidents?

Our Reliance on Smart Car Technology is Making Us Complacent

Recent survey results confirm that reliance on smart car technology is making us complacent behind the wheel. Just look at some of this survey data: 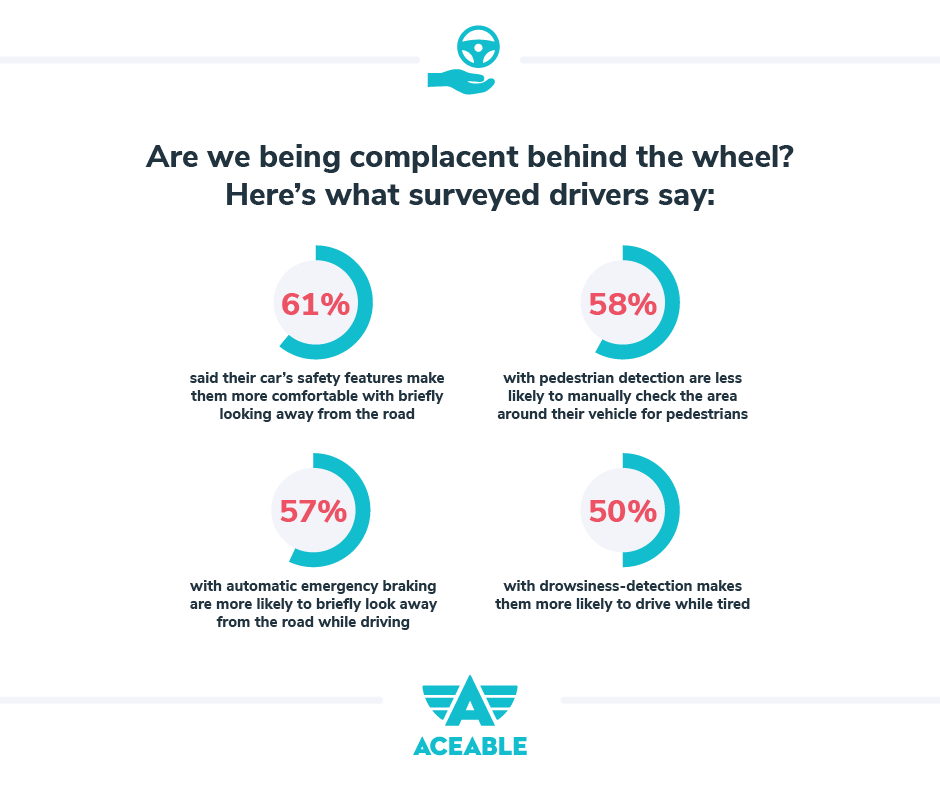 Unfortunately, the tech is not evolved enough to allow drivers to relax their own safe driving skills. This is evidenced by the rate of accidents involving vehicles in self-driving mode. Drivers who have a car with self-driving mode were 106% more likely than average to be involved in an accident.

No particular demographic is immune to complacency. Of those who previously drove a car without additional features, 3 in 10 say they are spending more time on their phones while driving than before.

But drivers with less experience tend to be more susceptible to overconfidence. For example, drivers who have been driving for 10 years or less were 209% more likely than experienced drivers to say they are spending more time on their phones while driving than before they had safety features.

And this inexperience and overconfidence result in more car accidents. In fact, drivers with 10 or fewer years of driving experience were 320% more likely than average to report that they had been involved in a car accident while driving within the last year.

While the data suggests that smart car safety features are making us lazy in our safe driving practices, that doesn’t mean we shouldn’t use them.

And car owners are happy to pay for these features:

The best way to prevent accidents is to take advantage of smart car safety features while also practicing good driving behaviors. It may take some conscious effort to remain vigilant when you want to just rely on your car’s safety features. But it’s worth the effort to keep yourself, your passengers, and everyone else on the road as safe as possible.

In the future, autonomous self-driving vehicles might remove human error and distractions from the driving equation. Interestingly, 56% of those surveyed believe this could happen in the next 10 years. But until then, it’s your responsibility to drive safely.

Sadly, other drivers might not be as conscientious as you are. So you should consider enrolling in a defensive driver course where you can learn techniques to avoid other drivers who might not be using safe driving practices. With affordable courses available conveniently online, there’s no reason not to prepare yourself to be a safe driver. You might even save money on your auto insurance premiums by earning a safe driver discount for taking the course.

Your smart car safety features are only as good as the smart driver operating the vehicle. And investing in safety is always a smart idea. Enroll in a defensive driver course today.