What Is Distracted Driving?

One afternoon, an unusual assignment landed on the desk of a northern California claims adjuster for a nationally recognized auto insurance company. He was asked to investigate a one-car accident that occurred on a steep and curvy section of Interstate 50, between Placerville and South Lake Tahoe. Those familiar with this stretch of road know that its many hairpin turns are as breathtaking as the views they afford of the Sierra Nevada landscape.

The vehicle involved was a high-end, luxury model with less than a couple hundred miles on the odometer the day of the fateful trip. The four occupants of the car were a tight-knit ladies group, who had expected to spend the spring day shopping and relaxing on the shores of the lake.

The driver and owner of the vehicle took no small measure of pride in the many features and elegant design of her new car. So she became quite distressed when the centrifugal forces of a particularly tight turn caused a half-full soda can to jump from its place in the center console to the floorboard beneath her feet.

Rather than pull the car over, the driver attempted to multi-task, steering with one hand while frantically and unsuccessfully groping with the other for the meandering soda can that was emptying its contents on the floor mat beneath her feet.

That was the last thing the driver remembers — her vehicle took flight, leaving the shoulderless road and wedging itself in between the lower branches of a Jeffrey Pine tree some 20 feet or so down the embankment.

Although the car was totaled, the ladies group emerged relatively unscathed, climbing out a side window with minor injuries and just one broken bone between them.

A few days following the accident, the claims adjuster received a phone call from the driver, asking for one, last favor before he closed his investigation: “Could you please go to the salvage yard and fetch the soda can from my car? I want to put it on my mantle with a sign that reads ‘Most Expensive Drink Ever.’”

Driver distraction can take many forms and can present itself at different times during a single drive. Additionally, a single activity or event can involve multiple forms of distraction. 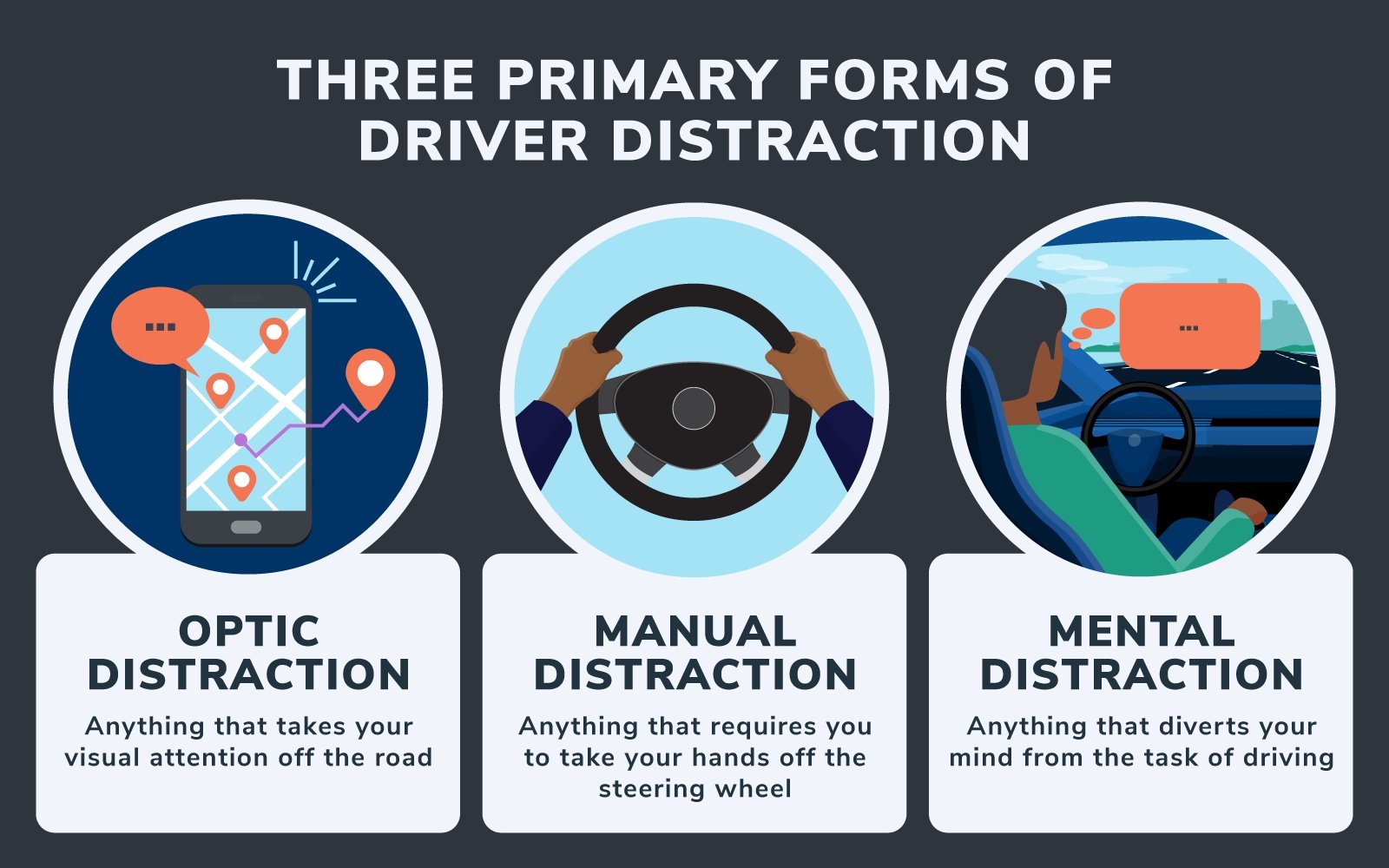 Looking down at your cell phone in response to that addictive ping? You’ve been visually distracted. Giving a side-eye to your friend in the passenger seat? You can’t possibly be looking at the road at the same time, right?

What about adjusting your side and rear-view mirrors? Isn’t making sure you’ve got good sightlines a responsible thing to do? Well, yes — BEFORE you begin your drive. Otherwise, that, too, is taking your eyes off the road while driving.

The current view of most driving schools conforms with that of the National Highway Traffic Safety Administration (NHTSA) regarding steering wheel hand positioning: Place your hands at the 9 and 3 o’clock positions. Anything other than that represents a compromise of vehicle control and safety by varying degrees.

Taking your hand off the wheel to grab a steaming French fry from a fast-food container, fumbling around to change a radio station, or reaching out to manipulate a touch screen are just a few examples of commonly performed activities that represent manual distraction while driving.

Most seem harmless enough and certainly not as egregious as attempting to shave or apply makeup while driving, but they all reduce your ability to control the steering of your vehicle. And, depending on the circumstances, that minor compromise can make a major difference.

There is a phenomenon that plays a large part in driving distraction known as inattentional blindness. It has been studied by psychologists for several decades. The research suggests that mental distraction can prevent us from visually perceiving surprisingly large and normally discernible events.

One notable and somewhat entertaining study, for example, revealed that half the observers of a basketball game failed to notice a person in a gorilla suit who walked onto the court during the game while thumping their chest and facing the camera for a total of nine seconds of screen time!

Another study, this time involving pilots in flight simulators, considered how the placement of the distraction affected visual perception. While using a head-up display (HUD) that projected important information such as airspeed and altitude onto the windshield, the pilots in this study often failed to notice other unexpected but important items that were introduced into their field of vision, such as planes on a runway.

From this, aviation psychologist Christopher Wickens concludes that, even with the superimposition of multiple images within a narrow field of vision, there is no guarantee that all will be seen. And it is his contention that this has ramifications beyond the aircraft industry and into many facets of our everyday experience.

The statistics available on distracted driving are endless, but here are a few eye-openers:

Probably the most frustrating AND promising thought about this is that a very large percentage of accidents involving distracted driving can be prevented.

Combating distracted driving requires a proactive and intentional mindset. Before you get behind the wheel, you need to acknowledge your limitations, set your intentions, and plan ahead. Here are 8 more suggestions on how to avoid some common distractions.

There is a multitude of available studies on the myth of multitasking that show with certainty that we are just not that good at doing several things at once. The debate is over. Our brains are just not wired for that.

Even so, there is a certain amount of multitasking while driving that is unavoidable. But your intent should be to keep it at a bare minimum. A wise man from the 1st century once said, “he who chases two rabbits catches neither.”

Your goal on the road, therefore, should be focus, not efficiency. (And leave those bunnies alone.)

Setting your intentions is especially important for teens — both as drivers and passengers. Use positive peer pressure to encourage responsible driving practices and reduce distractions. Be clear and be vocal about it. You’ll probably be pleasantly surprised at the support and cooperation you get.

And if you find yourself in a car with a distracted driver, ask them to focus on driving and offer to assist with navigation or other tasks that might otherwise distract them.

Many of the behaviors that result in distracted driving stem not from a lack of care but a lack of planning. So, before your next trip, program your GPS, set up your playlist, and put your phone on silent mode — and, for extra credit, keep it out of sight for the duration of the drive.

There are a number of great organizations dedicated to reducing distracted driving.

Many of them have joined forces under the umbrella of the National Distracted Driving Coalition, including the National Transportation Safety Board, American Trucking Associations, the National Safety Council, and many more from the private and public sectors.

Their collective vision and mission: “To accelerate national efforts to implement short and long-term interventions that will promote attentive driving and eliminate distracted driving fatalities and injuries.”

A good drivers ed course will not only prepare the student driver for the state test but will also provide them with tips and tactics to make them safe and attentive drivers.

Michael Rhoda is a writer at Aceable, where he creates pre-licensing education courses for real estate. Michael is also a nationally recognized, award-winning writer and illustrator of greeting cards and editorial cartoons.